A Mission on Wheels 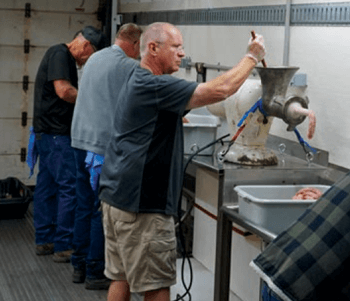 Because we live and work in the “corn state,” Iowans are all keenly aware of the recent extreme markets for grain and livestock. It’d be a dangerous understatement to say the pandemic has negatively impacted the markets and our food supply. When headlines are reading, “COVID-19 is causing food shortages,” “Meat plant closures bring concerns about nation’s food supply” and “Coronavirus sends agriculture reeling,” we know our livelihoods and generations of farming are being threatened.

This spring, five men with Jasper County connections became concerned not only for the fate of their fellow producers and growers, but for the families in their communities. They say great minds think alike, but these men set out together on a mission driven by a higher power than just coincidence or like minds.

It all started with a phone call in May. “I got a call from Randy Van Kooten for the first time ever,” said hog producer Bryce Engbers of Grinnell. Randy is from Lynnville and also has hog sites. “He said he’d been thinking about how horrible the meat market was and had an idea to purchase a refrigerated trailer to butcher hogs in during these desperate times.”

Shortly after this call, Bryce’s business partner, Rick Fopma of Lynnville, made an almost eerie pronouncement. He had just been talking to a friend, Joel Jansen of Sully, who was thinking about doing the exact same thing. The next day, Bryce shared the idea with David Jansen of Kellogg, who immediately said, “I’m in, too!”

In a matter of 48 hours, all five men were in favor of the project. By 4:00 p.m. on May 5, they had purchased a refrigerated trailer from Vander Haag’s in Des Moines.

“After COVID hit, I watched packing plants start cutting back, and I just felt there was going to be a need for meat in our community,” said Rick. “I wanted to help serve others in this way.”

“We were concerned about a meat shortage, since many lockers were nine or more months out from being able to process,” added Joel. “We knew some families couldn’t wait that long.”

They are not interested in competing with local businesses; their goal is simply to get food to families and help producers so they won’t have to let their animals go to waste. So, the group reached out to the local Sully locker to discuss their project.

From there, both commitment to the project and modifications inside the trailer moved quickly. In fact, just one month passed between the date of purchase and when they could begin butchering. “Fabrication inside the trailer featured a lot of local talent. Some custom welding was done by Mike Engbers. There was some reused stainless steel and many, many donated items,” said Randy. “We knew the trailer had to be easy to clean and easy for additional volunteers to work in someday.”

The group has applied for their own “stamp” from the USDA, which will certify them as a locker. That will allow them to have meat inspected, so they can donate it to food banks or other food relief programs.

“The local USDA officials have been very, very supportive,” said Bryce. “They have helped us develop standard operating procedures around food safety practices.”

Big picture: The group hopes to someday invite families to use their trailer and process their own meat. For now, they will continue to butcher for their own families and perfect their process. “Good causes and what our faith requires is not work—it’s fun,” said Bryce.