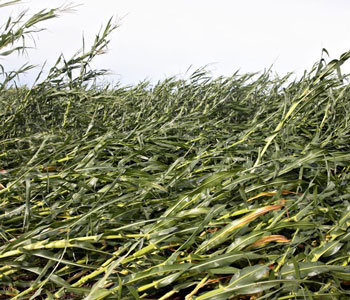 Derecho. Another of those words we wished we hadn’t heard in 2020 but are quite certain we won’t forget about the results from its occurrence. Millions of corn acres were damaged, and there are many questions about the lasting impact.

In cornfields, what did it leave behind? The damage varies considerably, but for this article, let’s break injury into three categories:

Effect of root lodging at >45° angle on corn

There is research that looks at impacts of lodged corn on yield, however, most was done on corn before or shortly after tasseling. Most of this year’s affected corn is in the dough stage (R4), or even early dent (R5). Carter and Hudelson (1988) from the University of Wisconsin conducted a study where they manually pushed the base of corn plants perpendicular to row direction to cause root lodging. They noted that within two days after lodging, the upper portion of plants became upright and subsequent timing of plant development was not impacted. However, more barren plants were observed when lodging occurred at later development stages, impacting yield. Corn lodged after V17 resulted in a 12-31% yield reduction. There are a couple distinctions to consider. The ability of corn plants to recover and become upright is much less likely when plants are lodged at the R4-R5 stages than in the late vegetative or early reproductive stages. Yield loss would be more when lodging at V17, since there is 0% of the grain dry matter accumulated at that time. Grain dry matter at R4 is about 20%, and at the beginning of R5 it is 25% (see ISU Extension and Outreach publication PMR 1009, “Corn Growth and Development”). Availability of moisture, severity of root system damage by lodging, and other issues can impact the extent of yield loss in this situation.

Effect of pinched stalks, broken stalks above the ear, and severe root lodging

Kinks in stalks restrict movement of resources within the plant, similar to kinking a hose while filling a water tank. If all plants are flat and still rooted into the soil, certainly they are not intercepting as much sunlight and therefore not filling grain as normal. If roots were damaged significantly and it continues to be dry, additional yield reductions will occur because nutrient and water uptake efficiency will be compromised. Plants with broken stalks above the ear will continue to produce photosynthates using intact leaves, but the available resources to fill grain will be greatly limited. Best-case scenario would be the yield loss mentioned above, with more yield loss possible based on these other potential issues. Test weight will also be compromised. Additionally, these stresses might cause premature death of some plants. Hopefully, they continue to live and produce marketable grain, although they will mature at a slower pace.

Plants broken off below the ear

These plants can no longer add dry matter to the grain, so we are left with about 25% of the potential dry matter accumulated. Test weight will be very low, and the ability to store grain killed in the dough stage is extremely limited, if at all possible. If you made it to the early dent stage, yield loss is still likely over 40%, and test weight and storage capability remains very low. The best use is silage, if a use for that much silage can be found and it can be properly ensiled.

All this discussion deals with is what happens to the ear on the stalk. Future ICM News articles will discuss the problems and some suggestions for harvesting this compromised corn, and dealing with potential grain quality issues.