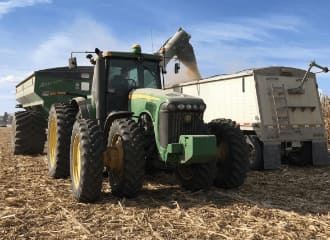 It is safe to say that we have been in a bull market this past month. Bullish news is bullish, neutral news is bullish, and bearish news is neutral. Last week’s report (ending grain stocks for the year) was bullish, taking 260 million bushels of corn out of last year’s production. Since then, corn has gone up $.26 and beans have come up an additional $.65. The October USDA Crop Production report was friendly as well, printing as-expected numbers. The two most important numbers on this report were the carryout numbers (or surplus bushels). Our corn carryout is now estimated at 2.1 billion bushels and our bean carryout is 290 million bushels.

Besides the past two USDA reports driving this market, we also have China buying more beans from us almost every day. So much so that we are sold out on export capacity for October through December at our ports. We physically can’t export any more grain during this time frame. So the next big thing to watch for with these markets will be the La Nina event playing out in South America. If Brazil stays dry, their bean crop will be planted late, which could result in an additional export window in late January and February for the US to keep selling beans to China. The reason why this most recent October USDA report was so important, was confirmation how few “extra” beans we have on hand. With a carryout of 290 million bushels of beans, if our export window to China gets extended, there aren’t very many soybean left in the US to buy.

After that, it will be a matter of how many of these purchases China takes delivery on. China (and “Unknown”) have bought 1.496 billion bushels of US soybeans so far. If we get that additional January/February export window, China could easily buy the US out of soybeans. For whatever reason (weather in Brazil or political), if China decides to cancel or roll some of their soybean purchases, those soybeans will quickly add back up into our country’s surplus bushel amount for the year. How are they coming along so far on importing? China has taken delivery on roughly 16% of what they have purchased so far and we are roughly 25% through our export window for the year. So China is slightly behind on taking physical delivery so far, but (similar to their pace of buying our beans throughout the year) they could catch up in a hurry if they wanted to.

We started last December with Key Co-op Marketing meetings.  We invited Stone X and Ryan Moe walked us through a live crop report.  The corn and bean market gave us what seemed like ho-hum pricing at harvest, yet seemed to continually decline.  The trend was to sell the crop and re-own it, either with options or on the board.  If the winter blues were not salty enough, late February saw increasing demand destruction.  Storing it in the bin seemed like a rally would never happen, and the downward spiral that happened conveniently about the time of Covid19 made the dreary days of spring even drearier.

When we finally got around to putting the 2020 crop in the ground, we were again looking at dismal prices, and it seemed the US farmer was going to plant an unprecedented number of acres, so high in fact that some bears were starting to make low-ball predictions.  With a correction in acres, dryer than usual weather, an inland hurricane, and the funds getting their motors running, the markets continue to give the farmer optimism.  This crop has had nine lives, has used eleven, but still continues to live.

Corn is a little higher than we were a year ago.  Granted, if you don’t have a crop to sell, that might not seem relevant; however, we are in October, which is the harvest price discovery.  December 20 futures are just higher than $3.88 today, which was the February average of December 20 futures.  Last fall the crop that was sold directly out of the field seemed to be the best plan.  Second place was the Minimum Price Contract, which involved buying an option.  Those that chose to buy it back on the board did very well if the contract was sold back before the rapid descent prior to demand destruction and Covid19.

That brings us to Harvest 2020.  What to do?
Corn:  If you think there is still hope in the corn market, we have several ways to re-own corn.  Stone X has a Flex Floor Program that is worth looking at that is a managed option approach, with guaranteed bushels sold over a period of time.
Soybeans:  I believe this chart says it all:

Give us a call to talk about the corn that is going in the bin.  We can keep a close eye on basis and spreads in the months to come.  Keep an eye on the 2021 new crop prices.  We have been knocking on the door of $3.99 CZ21.  If it is the $4’s you are looking for, put the orders in now.  Time is on our side.  The SX21 Bean price is a hard pill to swallow when the market is telling us beans are a buck less a year out.

Last but not least.  We have a limited number of Condo Units in our last offering.  They are still at $1.75 per bushel in 5,000 bushel increments.  For the right producer this is a good value.

Keep an eye out for the upcoming December marketing meetings.