Snapshots of a Productive Spring and Strong Fundamentals 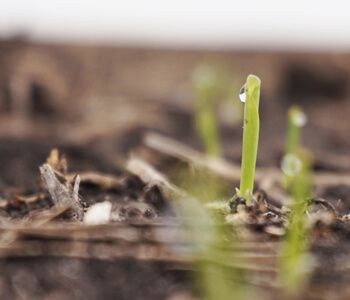 It’s been a productive spring at Key Cooperative, and it’s safe to say there’s a lot going on in the commodity markets as well. We spent all winter diligently planning four major grain facility rebuilding projects across Key, and the nice weather has given us an early start on them. The landscape is changing quickly at Kelley, Nevada, Zearing and LeGrand, as old facilities are cleared out and a small army of earth movers paves the way for new facilities. We’ve excavated for multiple pit basements as well as bin, tower and dryer foundations. Concrete is being poured right behind the excavators. Given our current pace, structures should start going up this month. We will have to maintain a steady march this spring and summer to get the projects completed before harvest, but we’re feeling very confident with the progress we’ve made.

The Key Grain team has been busy as well. The derecho knocked out a lot of our upright space late last summer, so we fully utilized grain bunkers when and where it made sense, especially at Nevada. We’re finally tapping into those piles with the uptick in corn demand this spring. Harvest wasn’t easy last fall, but the crop came out really dry, which has been great for long-term bunker storage.

Let’s talk about the markets: It’s been a wild ride the last 12 months, and it’s safe to say there are some strong fundamentals. The April USDA Supply and Demand Report exemplifies that. The USDA knocked the carryout on corn down another 150 million bushels, with increases in all the major demand categories. Exports increased by 75 million bushels and feed use by 50 million bushels. Ethanol ticked up 25 million bushels. Many pundits still think the USDA is being overly conservative despite these changes, which brought the 2020/21 corn carryover down to 1.352 billion bushels.

I tend to back that feeling, as shipped and unshipped corn exports are already at the USDA’s new number with five months still to go. Furthermore, the trend in the 2020/21 corn carryout looks like an all-out freefall. Remember, this is the carryout that was projected at a record 3.3 billion bushels less than a year ago, and it had everyone thinking there was no bottom in the price of corn. Low prices cure low prices, and we’ve dropped nearly 2 billion bushels from that early estimate. It makes you wonder how much further it will go, given the tight stocks situation. The chart below from our partners at StoneX™ illustrates this dramatic trend versus past years.

Let’s pay attention to the weather outlook for this year’s growing season. The April to July U.S. Seasonal Drought Outlook has eastern North Dakota and northern Ohio improving, with just a localized drought area in northwest Iowa persisting. The largest swath of drought remains out west, with virtually no drought across the Midwest. Therefore, it’s probably not unwise to continue rewarding this rally, given normal weather this season and potentially another bump-up in the June 30 acreage report.

The Funds net-long or short corn position has always had a strong correlation to the price direction of corn. The graph below is an excellent illustration. Currently, the Funds net-long position has surpassed the 2012 high and is at the highest level since early 2011. To bring you a little comfort when discussing grain marketing, there is one thing we can always count on: Things change in a hurry when we go to extremes!