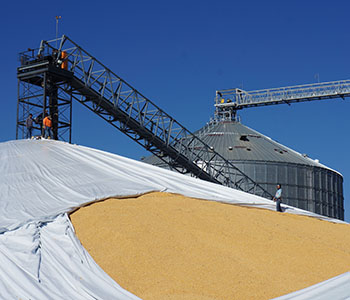 The market will find equilibrium at some point

The entire theme of this article comes from one of our brokers: “Our team in Brazil is reporting that at least two cargoes of Brazilian corn have traded into Mexico.” Yes, this report is shocking, even more so because it came in just days after the U.S. rail strike was shut down by Congress. That means we can’t even justify this development by saying Mexico was buying from different origins as a hedge against a potential U.S. rail strike. The solution to high prices is high prices. We (the U.S.) are geographically the closest and logistically the most efficient when it comes to getting grains to Mexico—and they aren’t buying every single bushel from us!

This development is just one example of how the U.S. export market is reaching equilibrium. At some point, the whole market will. We have the big final USDA report coming the second week of January. I’m nervous that it will reflect the equilibrium this market has been trying to find. Here are some signs of that approaching equilibrium: Nearly the only sector that is positive right now is soybean crush, but it can only take us so far if everything else is bearish. My biggest fear is that we just locked in expensive ammonia/inputs and will watch demand destruction slide the market lower like in 2013. That chart is not pretty.

I’m not saying this will be our fate this year, but it is a huge risk. I don’t think I can emphasize that enough. All this being said, the market has been hanging around the $7.00 cash corn and $15.00 cash bean price for two months for a reason. That is our current equilibrium. That is what it takes for end users to buy grain. If the market was totally bearish, we would already be priced around $4.50. There is still a significant amount of risk premium in the market. Russia might shut off Black Sea exports again, and Argentina’s dryness might expand over into Brazil. Most importantly, we haven’t seen significant relief on the U.S. drought monitor yet!

So what do we do to protect ourselves? First, take advantage of those base-hit sales as they appear and as they are profitable. A common strategy I’ve been seeing is to at least lock in some new crop bushels to offset input costs. If the market goes down, our inputs are covered. As for the January report, why not look at some shorter-dated options, like March, to cover our risk through most of the spring crop insurance pricing period? If you want to make a cash sale at these levels, why not tie a cheap call option to it to retain your upside potential? If you don’t want to make a cash sale but want to protect your downside risk, why not buy a put option?

If your concern is the drought monitor rather than the January report, let’s take a look at a May option. You would have risk protection through most of April, when you’d have a better idea of current moisture levels and a better look at the late-spring weather outlook.

Option pricing has cheapened a bit as markets have come off their highs. Granted, they are still what I would consider expensive, but when we’re looking at profitable prices potentially turning into unprofitable ones, it’s hard to justify not looking at these risk protection options.